Business orientated, ambitious, and with none of the hot-headed flamboyance of its more showy Latin neighbors, Santiago is the kind of city that doesn’t wear its charms on its sleeve but take the time to peel back the smoggy layers. You will discover a city that’s embracing its history, culture and the best location in the Americas all with a newfound sense of fun. Located smack in the middle of super slim Chile, the country’s capital lies in the shadow of the Andes.

The Plaza de Armas was the first space to be created when the Spanish founded Santiago back in 1541 and it’s still the best place to take the city’s pulse. It’s not only kilometer zero, the point from which all distances and the rest of Chile are measured, it also has some of the city’s most impressive colonial buildings.

Santiago is notorious for its earthquake-prone location. The oldest building still standing is the Iglesia de San Francisco. Built in 1572, it has endured hundreds of quakes although it has lost its tower three times along the way.

The city’s political history has been as unstable as its geographical one. History buffs should seek out La Moneda Palace, the presidential palace to see the spot where Chile’s military coup took place in 1973. Then head to the state-of-the-art Museo de la Memoria or memory museum for an in-depth assessment of the Pinochet regime and its impact. 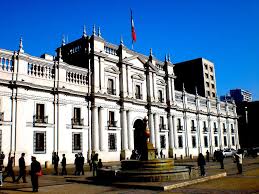 For a taste of everyday life, you can’t go past the colorful Mercado Central. Once a colonial rubbish tip, this is now the city’s most important produce market and is the best spot in Santiago to try Ceviche. It is made from raw fish and lime juice, this is the nation’s favorite dish.

On Sundays, the Central Park de Forest Isle is a magnet for musicians, street performers, and craft vendors who share the space with the city’s love-struck youth. It’s also home to fine and contemporary art museums. Art takes over the streets in the district of Bay Avista where brightly colored houses sit side by side with revolutionary murals.

Tucked into the hillside here as Santiago’s most famous residence, La Chascona was built by the poet Pablo Neruda as a hideaway for his third wife Matilda. He named it after her messy hair. Rising above it all is San Cristobal Hill where hikers, bikers, and picnickers make the most of the city’s largest green space. Hire bikes at the bottom for a challenging ride to the top or take the easy route to the summit via cable car.

On a clear day, Santiago enjoys one of the most spectacular urban settings in the world. Snow-capped Indian Peaks dish up world-class skiing just an hour from the city. So if you are visiting in the winter, head for the hills.

Portillo is Santiago’s most famous ski resort and is widely considered to have the best powder on the continent. With so much to offer, there’s definitely more to Santiago than meets the eye.