Serbia, with its capital Belgrade is located in the center of the Balkan Peninsula, where the Eastern culture clashes with the Western ideology, mixed like an abusive cocktail. Now when we think of Serbia the first thing that pops into our mind, are its beautiful landscapes, historic relics, the EXIT Music Festival and the number 1 tennis player in the world Novak Djokovich. However Serbia is a fairly unknown destination for the rest of the world and even for most Western Europeans, so here are some interesting facts you probably never heard about, which might lead you to this magnificent wonderland.

Serbia has its own Grand Canyon
The Temshtice Canyon or otherwise known as the small Colorado canyon has a striking resemblance to the world renowned canyon in Colorado, for its distinctive red cliffs. Even though the canyon is much smaller when compared to its bigger counterpart, it offers equally as much beautiful scenery and thrilling outdoor activities.

Highest Number of Roman Emperors
Serbia was the birthplace of 18 Roman Emperors, putting Serbia second only behind Italy, the most famous of them all being Constantine III born in Nish, who elevated Christianity to the role of state religion.

Vampires
Serbia was the birthplace of the first vampire in the world and no, it was not Dracula. The first vampire that we come across in historic writings arrives from Serbia and his name is Petar Blagojevic, interestingly enough the word vampire also derives from the Serbian word, Vampir.

Raspberry Heaven
If you like raspberries than you’ll love Serbia, more than 90% of the world’s raspberries come from this place as Serbia is the global export.

Stone Village
The village of Gostusha, which is located on the slopes of the mountain “Stara Planina” has all of its houses built from natural materials such as stone, mud and wood. Surprisingly most of the houses still stand today, despite being built more than hundreds of years ago.

The first image in Space
The first image that was ever sent to space was in 1963, as the Cuban Missile Crises came to an end, the nations of Europe came together and sent a Serbian fresco known as Beli Andzeo (white angel) to the United States, as a sign of peace. The image was later sent into space in hopes of contacting extra-terrestrial life. 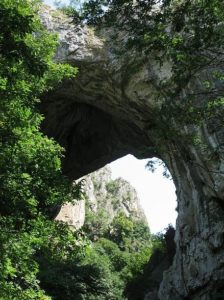 Tallest Stone Gates
Serbia is no stranger to natural beauties and such is the ravine of the river Vratna. The canyon is a popular destination for hikers, as it has the three highest stone gates in Europe, Little Prerast and Big are easily reachable as they are only 10 minutes away from the female monastery of Vratna, while Dry Prerast is a less attractive to the eye of the public, requiring a 3km hike to reach which leads through a narrow canyon that only skilled climbers can pass through.